This is just one page to promote the story of THE ARTEFACT, where the BLUE ELEPHANT stands in the middle. 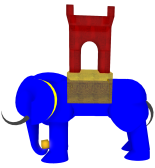 Want to read about THE BLUE ELEPHANT? You find him in the story of The Artefact. The part where The Blue Elephant steps into the scene first in the April issue of rez. In May the Blue Elephant made its way ... 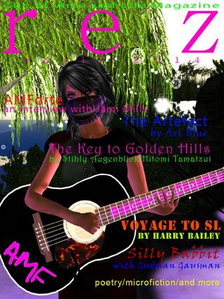 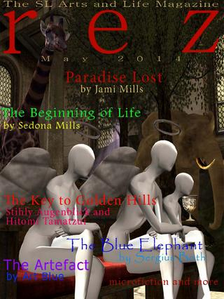 Here are the links to the previous published chapters of The Artefact: January 2014, Februrary 2014, March 2014. You can get the full story The Artefact as a special print here by one click ...

The short story "THE BLUE ELEPHANT" was written by my former professer for cybernetic esthetics Herbert W. Franke as he was a member of the jury of Ars Electronica. He told me it must have been around 1982. It was published in German language in 1997. In English for the first time in rez Magazine May 2014 -- giving the story of The Artefact another side coming from the old day as Herbert W. Franke created the first interactive art machine MONDRIAN on a Texas Instruments homecomputer TI 99/4 [1979].
I use his pseudonym Sergius Both with his permission to show everyone can be the one claming to be the maker of THE BLUE ELEPHANT as we are on the way to an existence in virtual and to a social media driven society.

The blog SECOND DOWNLOAD is still under development, but I give you a SNEAK preview.